Vietnam is located on the Indochina peninsula in Southeast Asia. Vietnam shares a land border with China to the north, Cambodia and Laos to the west. The name Vietnam translates as "South Viet", and was officially implemented in 1945. The capital city of Vietnam is Hanoi and it is the second largest city in Vietnam the largest city being Ho Chi Minh City. Not much time since violence and killings of the American War, Vietnam is one such country that in short time have changed and developed much. The development is noticeable with access to the country now being much easier. There are many accommodations rising high and the roads are more advanced which has added a large number of tourists visiting Vietnam and despite its history, tourists are interested in Vietnam’s attractive destinations. Paddy fields and sugar-white beaches, amazing cities and pagodas; Vietnam have surely come up a long way. Visitors find a vast number of places to visit and enliven them in Hanoi, Ho Chi Minh City and the other major centers. The capital city Hanoi holds the clues of centuries of change in its extensive Parisian roads and colorful Chinese temples.

Hanoi pays homage to the nation’s iconic Communist-era leader. Central Vietnam suggests historical cities and comprehensive beaches. Hue or Hway, the old majestic capital, is home to the Citadel, Royal Tombs and the eminent Perfume River. To wake your religious side there is awe-inspiring Hue Monuments, along with the My Son Sanctuary. The UNESCO-listed city of Hoi, exceptionally well-preserved and its streets are lined with old shop houses, Chinese temples, attractive bars and trendy restaurants. Phong Nha region is another must-visit amazing destination. It is home to three gargantuan cave systems, including the world’s largest cave and an interesting war history hidden in the midst of spectacular landscape. Also the city of Danang platforms its fire-breathing Dragon Bridge and sits only a few kilometers away from a golden seashore. Ho Chi Minh City’s period of war history is exhibited at the Cu Chi Tunnels used by Viet Cong soldiers and War Remnants Museum – with some horrible reality of war. Ho Chi Minh City (formerly known as Saigon) also has French colonial landmarks and this enormous city is also bursting with modern bars, shops and restaurants. The Mekong Delta is blessed with flourishing productive land where villagers in customary conical hats labor in vibrant green rice paddies and traditional boats with dragons’ eyes ply the muddy waters. Regardless of Vietnam cities’ attraction, what amazes most is the country’s exceptional landscape. Along with great flora and fauna, Vietnam is known for its beaches, rivers. In the recent years, the discovery of unknown species of plants, birds and animals have helped Vietnam’s biodiversity and develop the country’s national parks all the more pleasurable to visit. The 3,451 km coastline in Vietnam surprises the tourists with countless unspoiled beaches and also there are a number of lagoons. The main beach destinations are: Phu Quoc Island is off the South Coast of Vietnam and Nha Trang which is actually a city and the main part of it is therefore the busiest of the beach resorts with bars and nightlife. The panorama of Halong Bay is purely a delightful sight; spectacular rock peaks ascend spectacularly from the sea and floating villages sit lethargically in the bay. There is also another beautiful An Bang beach to visit. Vietnam is a perfect blend of history, culture, nature and people. Visiting Vietnam will surely give you life long memories.

Visit the main cities and towns of Hanoi along with day cruises around the magnificent Halong Bay.

Proceed off the secluded trail via bicycle and visit the islands, waterways, markets and communities of the spectacular Mekong Delta.

Travel to Vietnam’s captivating center and explore the stunning conserved prehistoric city of Hoi An, archaeological sites from the ancient Cham civilization at My Son and the previous colonial capital Hue.

Visit the major cities and towns of Vietnam along with day sail around the splendid Halong Bay and the serene Mekong Delta.

Vietnam at a Glance 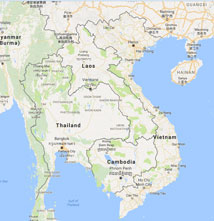