Get Ready To Go

Any questions? Please feel free to call us. No obligation!
Contact Person: Devraj Nepal
Tel: 977 (1) 4351780
Email: This email address is being protected from spambots. You need JavaScript enabled to view it.

Spending a day in Kathmandu is not at all a bad idea especially for visitors with limited time and even if you are on a business trip, you can quickly yet effectively manage a day tour in Kathmandu. We ensure you it’s going to be equally amazing and full of excitement. We have prepared our itinerary along with different options in such way that all options consists of different destinations and no matter which option you choose, you will still have the best flavors of Nepal.

The capital city of Nepal – Kathmandu is the rich tapestry of the architecture, cultural heritage, religion, trade, history and food of Nepal is one best thing not to be missed.

Pashupatinath Temple: This beautiful temple dedicated to Lord Shiva is regarded as one of the most holy temples by the Hindus. Only five Kilometers east of Kathmandu city, this temple is on the bank of the sacred Bagmati River. Although this temple is strictly prohibited for non-Hindus, visitors can see the temple from the eastern bank of the Bagmati River. In 1979, Pashupatinath temple was listed in the UNESCO World Heritage Site. The back of the temple consist of many funeral pyres. In recent massive earthquake that occurred in April 25th, 2015, this temple was left unharmed.

Boudhhanath Stupa: Built in 5th century and 2500 years old Buddhist stupa, this is an ancient and also the largest stupa in the world. It is located about 7km from the city center and also close to the airport.

The Buddhist all across the world considers this stupa one of the most significant and sacred and it is supposed that, once in a lifetime all Buddhists must visit Boudhhanath Stupa so the stupa attracts thousands of pilgrims from different places every year. Boudhhanath Stupa is considered equally sacred and important by the Hindus as well. This stupa stands beautifully with four pairs of eyes in all the four directions. In recent massive earthquake that occurred in April 25th, 2015, this stupa was badly damaged. However, this is one of those very monuments that have been repaired very quickly.

Bhaktapur: Bhaktapur is an ancient Newar city situated in the east corner of the Kathmandu Valley. It is one of three ancient cities besides Patan and Kathmandu and also Bhaktapur is a UNESCO World Heritage Site. Bhaktapur is one of best preserved cities famous for history, traditional art and architecture, historical monuments and craft works. The culture here rich and temples here are truly a great work of art. The ponds, pottery and weaving industries are also center of attraction. Bhaktapur was one of the most and badly affected cities in recent massive earthquake that occurred in April 25th, 2015. But only few temples were damaged with much left to discover.

Dhulikhel is located at 30km the east of Kathmandu. Dhulikhel has been a central trading centre in an ancient commercial route linking Nepal to Tibet for many centuries. This is one authentic Newari town. It has temple-lined village square and a life outside of exposing tourists to the views. The several temples here illustrate an example of traditional and old Newari craftsmanship. Dhulikhel is surrounded by villages, farms, historical sites and forests making this place a true delight for nature lovers. Dhulikhel is also a perfect destination to execute a day’s trek out of Dhulikhel to Namobudha or Panauti which is an interesting way to get the hint of typical Nepalese lifestyles of country side. There is also mountain biking or even one of Nepal’s finest rafting rivers with a popular bungee jumping spot nearby.

Panauti is situated 36km south-east of Kathmandu. The town is believed to be situated on top of a single block of rock. Since Panauti is a historical town, it has both religious and historical importance and Panauti is also considered as the most artistic town in Nepal. There are a variety of Buddhist and Hindu religious monuments in Panauti and is believed to be one of the area's most significant medieval sites.

Panauti is one of the oldest towns in Nepal and there are many temples that dates back to the 15th century or may be earlier. There are many attractive sites around but the Indreswor temple - one of the largest and tallest pagoda style temples in Nepal and Durbar Square found in the town center are few of major attractions. This place attracts both foreigners and tourists equally due to its distinctive charm.

Swayambhunath: Swayambhunath stupa is a World Heritage Site also nick named as the monkey temple due to abundance of monkeys residing here. This 2000 years old stupa is believed to have generated itself and hence the name Swayambhu – meaning self-arisen. The 365 stone-steps leads you to the main Swayambhunath which is situated on a hillock- west of Kathmandu (2km from the main centre of Kathmandu city), and from where the panoramic view of the Kathmandu Valley from the stupa is purely spectacular. Swayambhunath has been an important center for Buddhist learning and the Buddhist also considers it very sacred but Swayambhunath is considered equally sacred and important by the Hindus as well just like Bouddhanath stupa. In recent massive earthquake that occurred in April 25th, 2015, many monasteries were badly damaged however the main stupa Swayambhunath remained intact.

Kathmandu Durbar Square: Kathmandu Durbar Square also called Basantapur Durbar Square which is a World Heritage Site situated in the heart of the city and its history dates back to the 15th century when the square housed the royal palaces of the Malla kings. Kathmandu Durbar Square is a hub of culture, art, architecture, history, politics, and religion. Kathmandu Durbar Square consists of three loosely connected squares and one of the most happening places in the city swarming with the tourists and the locals. The area is always seen at its busiest and even more during festivals. Durbar Square literally means a "Place of Palaces” and indeed this place is a cluster of beautiful temples and palaces. Some significant ones are Hanuman Dhoka, Taleju Temple, Kaal Bhairav, kumara Ghar (abode of living goddess Kumari), Nautale Durbar, Museums and many more. During the April 25th earthquake in Nepal, many parts of Kathmandu Durbar Square suffered a lot of damages including Kasthamndap which was totally collapsed and Nautale Durbar which was majorly damaged. Even today Kathmandu durbar square is still used for official religious ceremonies.

Asan and Indrachowk: Asan and Indrachowk are one of the oldest and traditional local hubs in Kathmandu lying next to each other and mainly settled by an ethic group called Newar. There are six streets coming together to form these busiest places and each streets takes you to another important destinations.

Asan is a Newari traditional market that sells everything from all kinds to rare spices to all kinds of worship supplies, marriage stuffs, fresh vegetables, varieties of brass and copper products, and everything you can think of that you might need. Asan remains exceptionally busy right from sunrise to sunset and full of vendors and purchasers rushing around.

Indrachowk is another famous and busy courtyard named after Hindu Lord – Indra and busy with daily activities. Some highlights of Indrachowk are: the large temple of Akash Bhairav also called Āju Dyah, a Shiva temple, Raki Bazaar- alley lined with small shops selling glass beads, a small temple of Lord Ganesha also known as Ganedya. Traditionally, Indra Chowk is a centre for the sale of blankets and cloth, and merchants cover the platforms of the Mahadev Temple to the north which usually go unnoticed.

Both Indrachowk and Asan are also famous for festivals and jatras or street festivals that are held here. During festivals, the area is even busier. These places are perfect to observe the daily life of the locals, capture some colorful photographs and rub shoulders with people as you walk around. Also these places are kind of rickshaw station so don’t be surprised if you find any rickshaws running in full speed behind you in these narrow streets. And a ride in local rickshaw is a must!

Both Bungamati and Khokana are small and traditional Newari villages. The villages are situated about 10km away from Kathmandu in Lalitpur district. These villages are perfect if you want to get familiar with Newari tradition, people and their lifestyle. In spite of this ever growing modernization, Bungamati and khokana still remain old fashioned. People here are much unsophisticated, live in a simple house and lead a very simple life. People from these villages are occupied in agriculture. It actually seems like time has just halted for these two villages.

At khokana, the most renowned thing is the Karyabinayak temple dedicated to Hindu god Ganesha. This is considered to be a very scared. People from all over come here to worship and seek blessing prior to any auspicious events. Also Khokana is famous for picnics as there is a beautiful picnic spot located nearby. Another not to be missed out thing at khokana is mustard oil. This place is very famous for getting one of the best and pure mustard oil. Like Bungamati, Khokana too is renowned for elaborated carving designs in stones or in woods; consequently, here too are many craft workshops and showrooms around village.

Both the villages Bungamati and Khokana faced some major damages in recent massive earthquake that occurred in April 25th, 2015. Many houses and monuments were ruined. 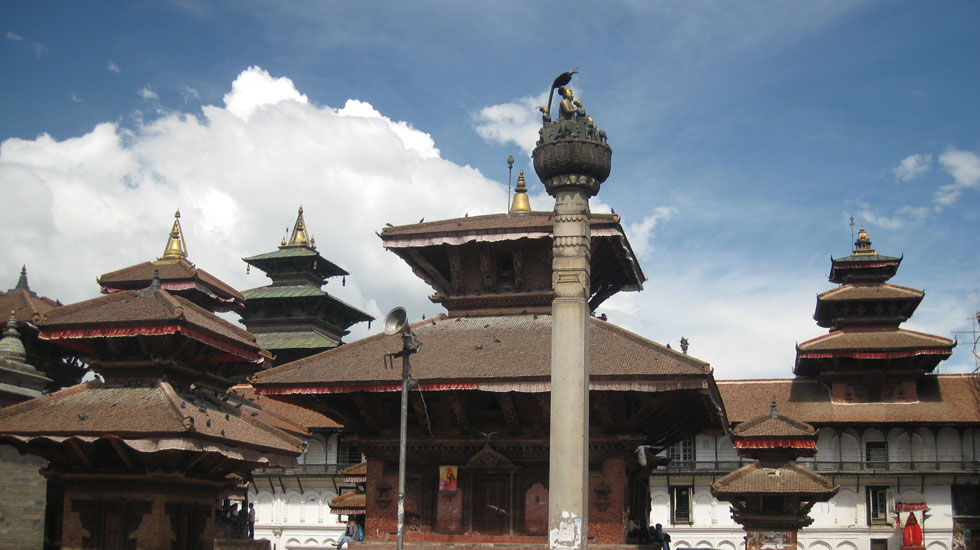 2nd Option: Day tour to Dhukhikhel and Panauti
We pick up you at your hotel around 9am and drive to Dhulikhel - a scenic and ancient town situated 30 kilometers east of Kathmandu on the Arniko Rajmarg (Kathmandu Kodari Highway). From here one can have a panoramic view of the Himalayan range. Visit around Dhulikhel and interact with local people. After lunch at Dhulikhel visit Panauti another beautiful village. In late afternoon drive back to your hotel at Kathmandu.

3rd Option: Day tour to Swayambhunath Stupa, Kathmandu Durbar Square and Local market Asan and Indrachowk.
At 9am meet the guide in your hotel and drive to visit the 2,000 year old Swayambhunath Stupa - a Buddhist shrine situated on a hillock overlooking the valley. From here we descend and drive into the Durbar Square of Kathmandu - the heart of the city. We visit the former palace and we will walk through the narrow road towards Asan and Indrachowk and visit dodging spice sellers, rickshaw boys, pilgrims and of course the roaming sacrosanct cows. In the evening at around 5pm drop back to your hotel.

4th Option: Day tour to Patan, Bungamati and Khokana
After breakfast in your hotel, our guide will pick you up at 9am and drive to Patan. We will visit Durbar Square with former Royal Palace and several temples, including Golden Temple, Kumbheshwara Temple and Mahaboudha Temple. We will drive to the traditional Newari Villages - Bungamati and Khokana where you will feel that time has stood still! Walk through the cobbled streets, poke into the private houses and visit the main temple of the village. Drive back to hotel by evening.