The Kingdom of Cambodia is bordered by Thailand to the northwest, Laos to the northeast, Vietnam to the east, and the Gulf of Thailand to the southwest with the total land mass of 181,035sq km. Cambodia is the 70th most populous country in the world with a population of more than 15 million and the country's minority groups consist of Vietnamese, Chinese, Chams, including 30 hill tribes. With that, don’t be surprised when they begin dealings in American Dollar. Surprisingly yes – American Dollar! Not only does the ATM sputter out USD totally, also the locals deal with American money. About 95 percent of the population in Cambodia practices Theravada Buddhism which is the official religion. With unharmed jungles straddling through the heart of the country, abundant flora and fauna, and a culture unaffected by the western world, we have but only nicked the façade. The spectacular temples of Angkor region attract most tourists, some important temples are: Bayon Temple, Bateay Srei, Preah Khan, Preah Vihear Temple, the Baphuon etc. But the largest and most magnificent of all the temples at Angkor is Angkor Wat- a massive stone temple and said to be the largest religious monument in the world built during the Khmer Empire. Khmers consider the temples of Angkor national a pride and a source of inspiration and all the Cambodians take it as a point of pilgrimage. And nevertheless Cambodia is so much more than just temples. Cambodia offers tropical beaches, colonial buildings and plenty of natural attractions. Besides, you can visit Tuol Sleng Genocide Museum which is a museum in a former Khmer Rouge prison, the Killing Field also known as Choeung Ek- a largest killing field where a mass cruel killings took place or Tonle Sap Lake- the largest freshwater lake in Southeast Asia- by boat to the floating villages.Also visit Sihanoukville-a beach with relaxed atmosphere. But if you hit upon life in Cambodia is getting a little bit unexciting – which we’re in no doubt wouldn’t ensue – go on a buffalo race, one of the local sports in Cambodia or you can at least watch it with the thousands of locals encouraging their favorite buffalo on. While in Cambodia, don’t forget to shop for Cambodian fine silk pieces and textile materials as they are renowned worldwide. Other things to shop in Cambodia are: sculptures, carvings, silverwork and paintings. Cambodia is a country with a past that are inspirational and miserable, enriching and distressing but Cambodia is slowly and surely progressing and just remaining to be experienced yet again from the Khmer Rouge that had left it in destruction 30 years ago. Though Cambodia is just starting to turn life around for its people, it doesn’t matter what the circumstances is, we pledge to provide our clienteles a touching roller coaster that will go on with them for years to come.

Trip to the capital city of phnom Penh and prehistoric city of Angkor, abode to attractive ruined temples in this 5 days trip is covering both prehistoric and modern history of this mesmerizing country.

Voyage in the course of Cambodia’s picturesque South Coast, discovering its antique temples, fascinating fishing villages and calming on its quiet beaches.

Combodia at a Glance 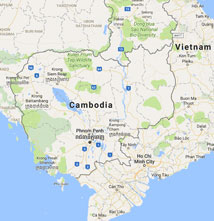